Edge cases are often the reason infosec professionals have jobs and understanding those edge cases can be a career path all on its own. For me, exploring these edge cases can make for some very interesting research. This post is the result of nearly a year’s worth of pulling different threads trying to learn as much as I can about phishing, punycode, and spoofing domains. My hope for this post is to document some of the interesting information I’ve found over the last year or so and maybe teach you a thing or two. If you enjoy this post, let me know on twitter!

Before we get into the interesting part of this research, we very briefly need to talk about domain squatting/typo squatting. Domain squatting is a fairly common technique that is sometimes used by nefarious people for various purposes such as stealing business, preying on those who mistype a URL, or simply to cause chaos. In fact, my domain has been squatted which you can read about here if you’d like. Some common techniques for domain squatting are as follows:

You’re smart, you get the point. These are some of the more well known techniques that everyone knows of. There is a famous case of someone registering a domain goggle.com (a very common misspelling of google.com) that for years was a website that had all kinds of sketchy redirects and adware pages. So how could this be taken one step further?

During a phishing engagement, it is fairly common to buy a domain very similar to the company you are phishing. This can be done through any of the aforementioned techniques domain squatting techniques, but what if you want to take this one step further? What if you wanted to get a domain that was nearly identical to your target? Well first we need to talk about ASCII (sorry…).

The internet was first created in the United States where we have an alphabet that contains characters A-Z with some numbers and special characters mixed in there. There was really no need for non-English letters to be used in domain names so ASCII characters were used when setting up protocols.

This was all fine and dandy until other countries began accessing the internet and people quickly realized that ASCII characters would not suffice. For example, what happens if someone wants to register a domain in a different language such as Vietnamese? This presents a problem because the Vietnamese alphabet has many characters that are not available in the ASCII character set such as:

So how can you register domains with these characters if you can only have a domain with ASCII characters? Introducing punycode! Punycode is a funny little encoding syntax for non-ASCII domains. It was first defined in March 2003 in RFC3492. Essentially, all this encoding scheme does is convert a non-ASCII character such as ê into a format that only contains ASCII characters, thus making it compatible with pre-existing protocols such as DNS. An example of this encoding would be changing hêllo.com to xn--hllo-gpa.com after punycode encoding. Essentially, punycode adds xn-- to the beginning of the domain, removes the non-ASCII letter, and encodes it at the end with -<encoded value>.com This means when you’re buying a domain with a non-ASCII character, you’re actually buying the punycode equivalent. This can cause some unexpected issues down the line if you don’t know much about punycode domains before buying one. You can play around with punycode encoding using this calculator.

Buying a domain with punycode is a novel concept but in practice, it can cause a few issues that you should be aware of before a phishing engagement.

With the theoretical knowledge out of the way, I wanted to give a high level overview of setting up a domain with non-standard characters. This isn’t meant to be a step by step tutorial but should allow you to recreate my steps if you really want to.

Setting Up The Punycode Domain

Originally I was trying to use the method I talk about in this blog post to host a simple static site using an amazon S3 bucket but for various reasons this failed. 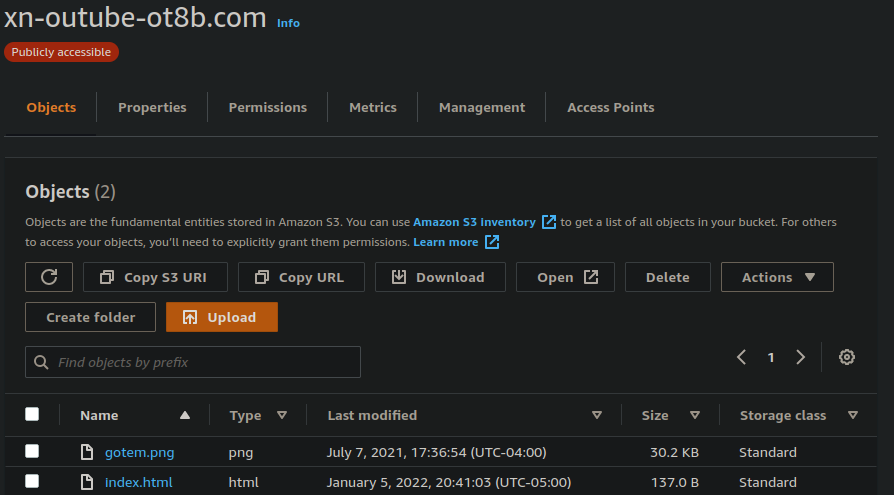 I will save you the hours of troubleshooting why this wasn’t working, but the moral of the story is that according to the AWS bucket naming requirements this technically works for creating a bucket but doesn’t seem to work for hosting a static site in that bucket. This is probably for the best since I wanted to do more than just server web pages. I figured hosting a site using a classic LAMP stack on an EC2 instance would work well and I shouldn’t run into too many weird AWS specific errors.

Hosting the site using an EC2 instance was the logical next step because it should have less bizarre constraints since you can just point your DNS A record to the IP address of your EC2 instance. Before I jumped head first into creating an nginx server, I wanted to test to see if I would encounter any issues routing the punycode domain (xn–outube-ot8b.com) to an EC2 IP. Fortunately, it was fairly straight forward to get this working now that I didn’t need to battle any odd S3 bucket nuances. Here is what my DNS record looked up after creating a hosted zone for xn--outube-ot8b.com.

After waiting nearly 24 hours for DNS to update and wondering if I was doing something wrong, I could finally issue dig ỵoutube.com and dig xn--outube-ot8b.com. Now that DNS was up, I could visit the site in firefox by creating a quick python server using sudo python3 -m http.server 80. I am still not sure if the punycode domain took longer to update in DNS servers around the world than a normal domain name but I’ve never had to wait longer than a few minutes for DNS. It was most likely just a coincidence though.

Knowing that I could create a server using this domain means I can do a lot in terms of what I actually wanted to host on the page. If you were creating a phishing engagement you could host the company’s login page, host malicious files, etc.

Now that I’ve verified that I can host a web server using the punycode encoded domain xn--outube-ot8b.com (ỵoutube.com) I needed to figure out what I wanted to host on this sever. Depending on your use case you may want to be creating a login page but for this example I just wanted to see how accurate of a clone I could make of youtube.com. My first thought was to use wget to download a youtube video page. This theoretically could have worked but messing with the HTML/CSS to get it looking just right was very tedious. 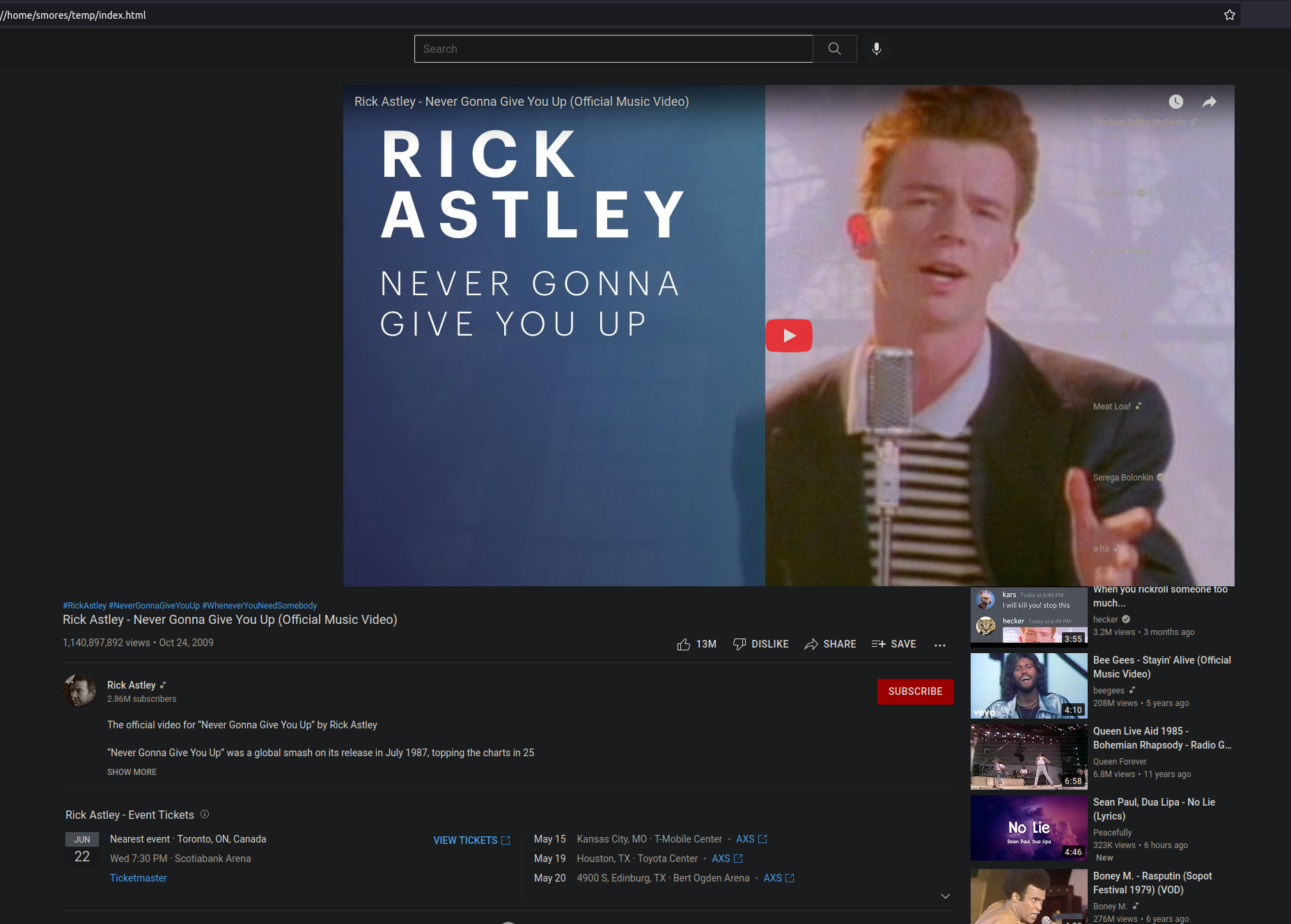 Eventually I was tired of fiddling around with those pages I downloaded using wget and found a github repo with a decent looking clone of youtube that was easy to edit. Next, I cloned this into my EC2 instance and began making some quick changes to the HTML and devising a plan to host it.

You could create an nginx/apache webserver (and I would recommend that if you’re not just doing research), but since this was more of a proof of concept, I decided to stick with a simple python server for now. The only problem was that when running sudo python3 -m http.server 80, you would see the youtube clone but the URL would be a dead giveaway since it was simply ỵoutube.com without a video ID. To remedy this, I just created a folder with the name corresponding to what I wanted in the URL. In this case watch?v=D5iap5aO4i99. Now all I needed to do was start the web server using the previously mention python command, and navigate to the site. It looks fairly realistic but will need a lot of altering as well as a valid SSL certificate. 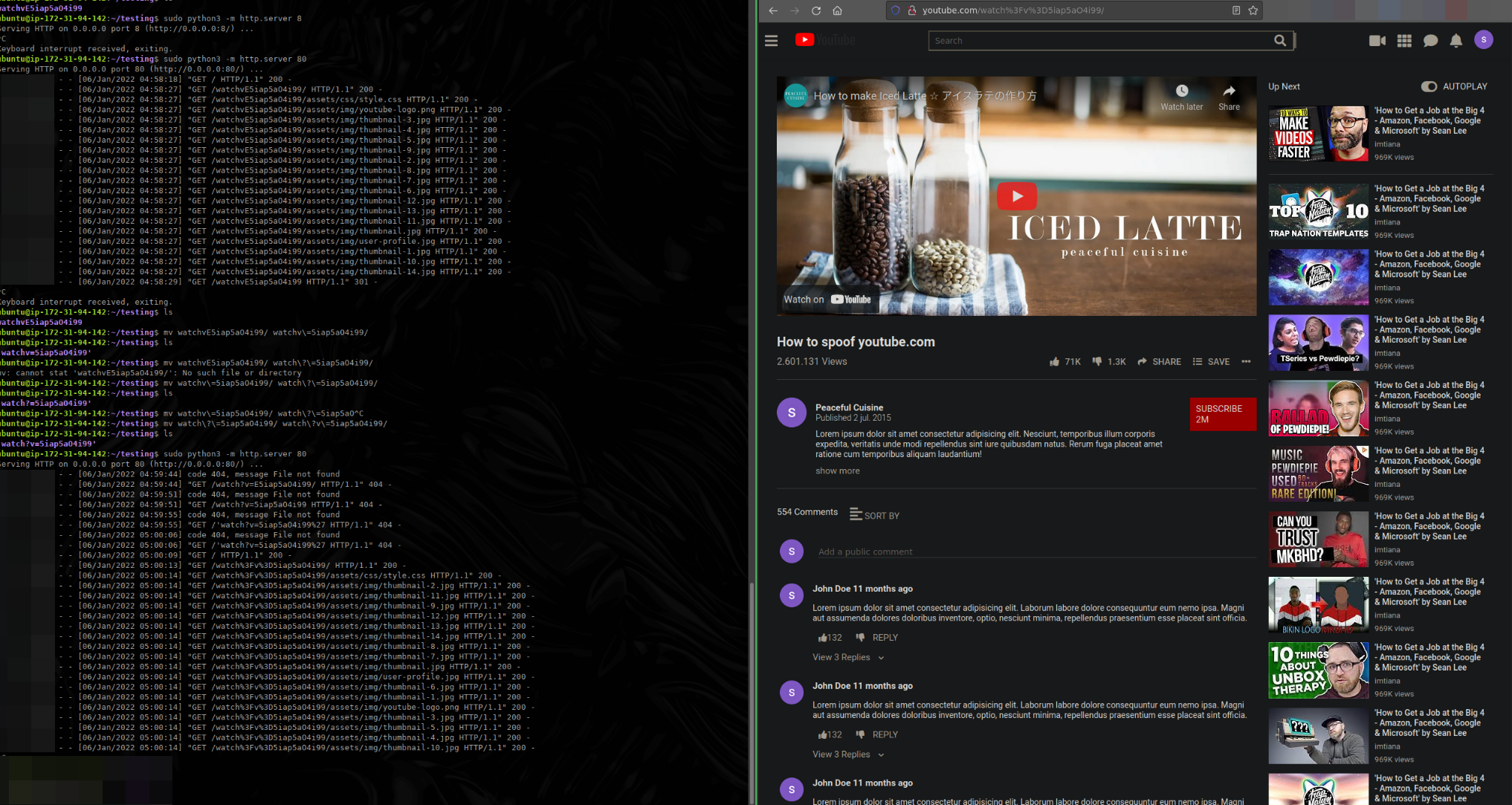 Getting A Valid SSL Certificate

The biggest glaring issue is the lack of a valid SSL certificate and thus we might see a warning saying that this site might be insecure and we don’t see the lockpad in the browser. Fortunately, using LetsEncrypt makes this fairly simple even when you’re just using a python command to host your server. I found a great writeup from CornerPirate that explains some extra info about how this works. After installing certbot, run the certbot command, fill out the information required for a certificate and then create a new python web server using twisted web on port 443, making sure to specify the path to keys.

That’s it! Super easy way to get a certificate for you web server!

My original idea for this research actually had nothing to do with hosting a spoofed site, it actually was just supposed to be a way for me to figure out how meta tags worked. A meta tag (or meta element) is just an HTML element that allows you to add metadata to a web page. This can be almost anything but sites like twitter/facebook/linkedin do special things with meta tags. For example, whenever I post a blog to twitter you’ll notice that it is usually accompanied by a nice little image preview. This is accomplished through meta tags. To get this working, you use a standardized set of meta tags that twitter will parse to render the image. For example, here is how mine are set up. 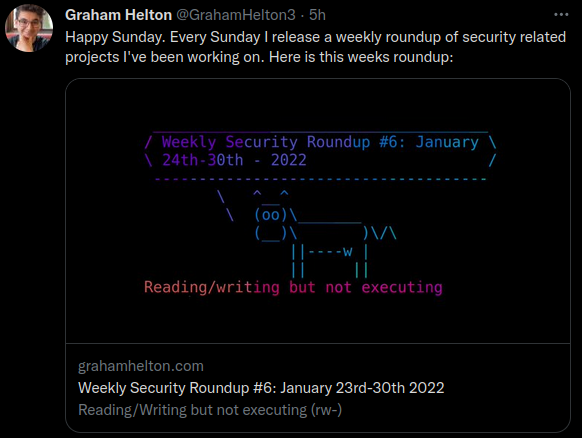 Meta tags I use for my site

Twitter has many different “Cards” that will display content in a number of different ways. When you post a link to youtube, you get a “player card”. When you post a link to github you get a “summary card”. You can read more about them here. Wouldn’t it be cool if I could post a link to ỵoutube.com and have twitter automatically pull the meta tags to display whatever video was on that page in the “player” twitter card just like it does for youtube? You’ve surely seen this, but you might not have know it had anything to do with meta tags. Typically the player card looks something like this.

I attempted to add “player card” meta tags to ỵoutube.com but was running into strange errors when trying to get them working on twitter. Twitter has a very handy [card validator] (https://cards-dev.twitter.com/validator) that you can use to test your twitter cards before posting the links. Unfortunately, I could not get these working using a simple python server or an nginx server. I’m not totally sure how to fix this or if it is possible. 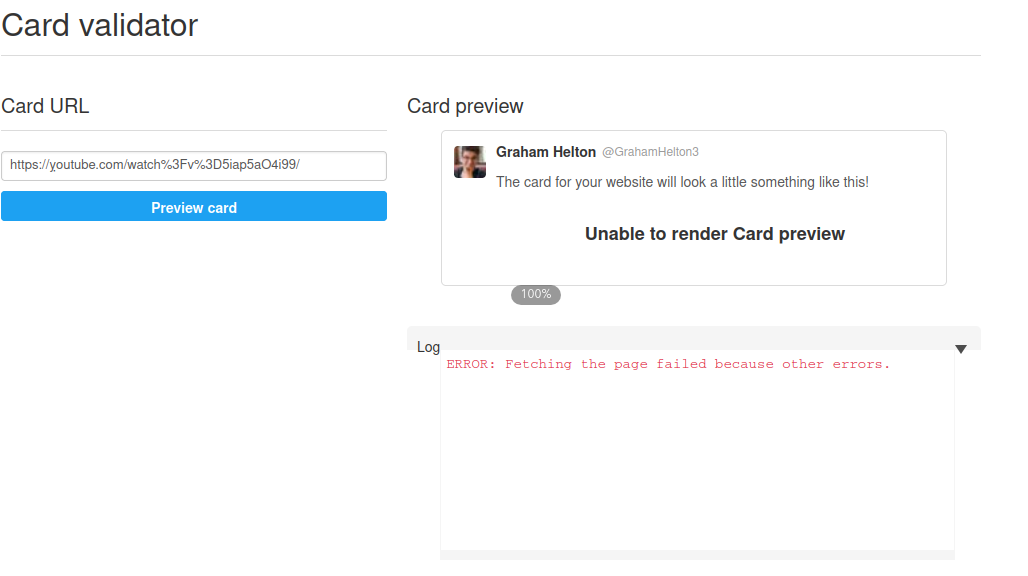 After spending some time editing the HTML template, I even got some comments that weren’t placeholder text/images. Obviously being able to add your “own” comments/views/likes on a video people think is on youtube is not great but also there is not much you can do about it. Here is a quick comparison of a real youtube video to my spoofed one. Left is the spoofed site, right is the real one. 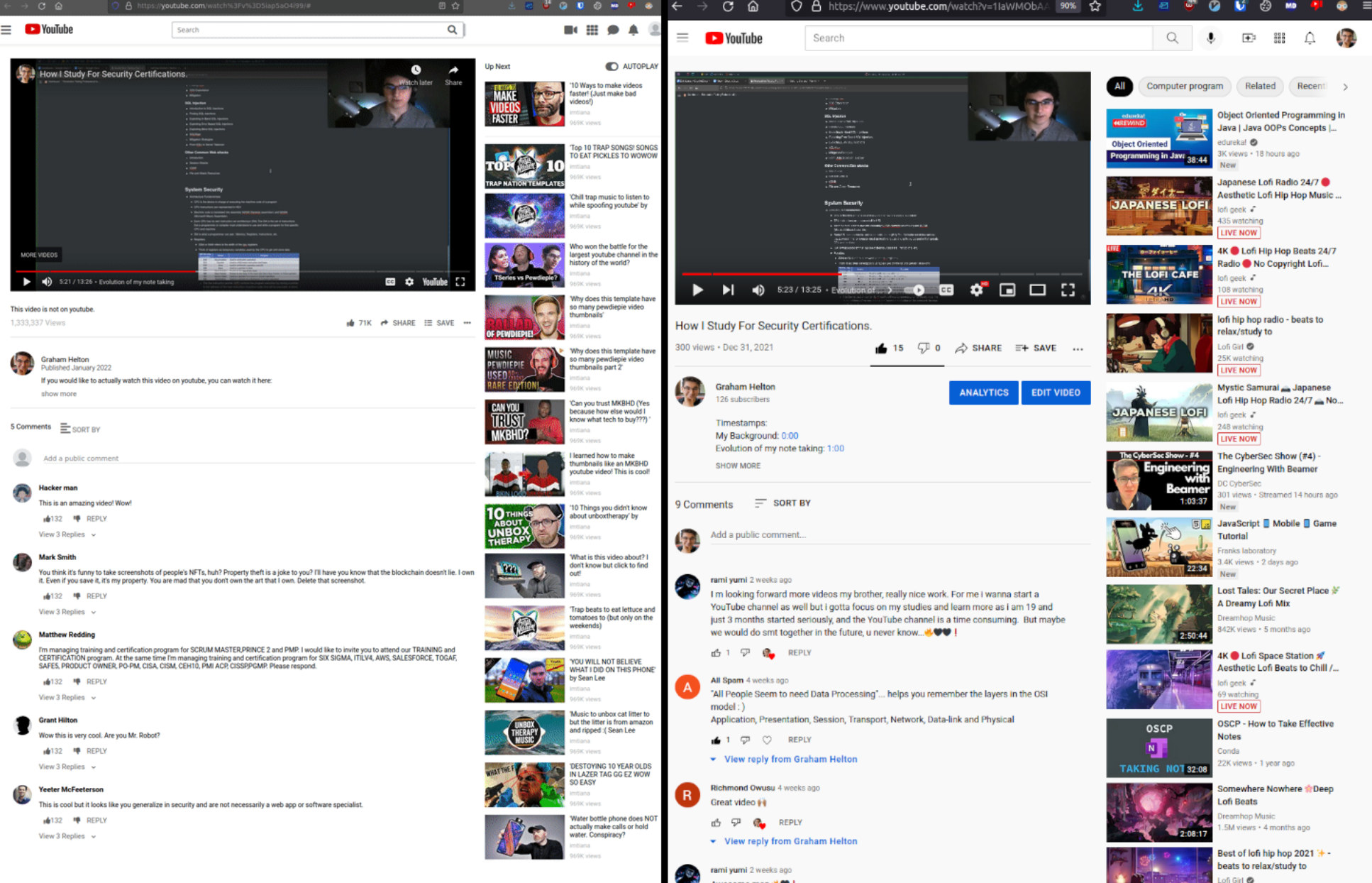 Quick note: The web server used to host ỵoutube.com is no longer live which means you cannot visit the site since this was just for research!

I had a fun time over the past few months doing this research and I learned a ton. If you have any questions about this post, please don’t hesitate to reach out to me on twitter.